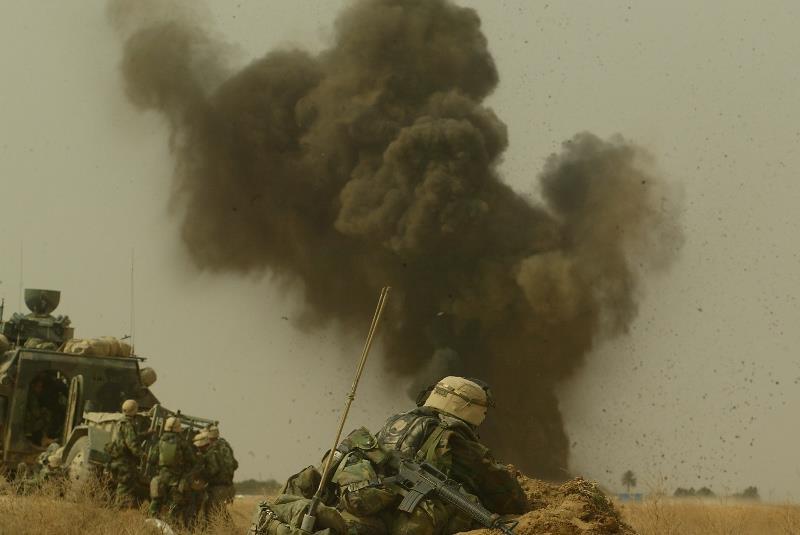 Over the last decade or so, the American public’s appreciation for soldiers has generally increased. I’ve witnessed dozens, possibly hundreds, of people thanking uniformed soldiers for their service, in stores, cafes, and airports. This commercial beautifully reflects that sentiment. We’ll celebrate through local parades and discounted prices by major retailers who may or may not do anything special for veterans.

Thankfulness hasn’t always been the experience of returning American soldiers. Things were very different for the guys who came home from Vietnam to find protesters waiting for them.

Many things have changed since then. One change is our understanding of Post-Traumatic Stress Disorder, or PTSD. Thirty years ago, PTSD wasn’t well known outside of mental health circles. Today, most people understand that not all wounds are physical and that “triggers” can be anywhere. In short, we’ve learned that “what happens at war doesn’t always stay at war.”

Technology has changed our everyday lives. Twenty years ago, beepers were the portable gadget to have and the only people who used the Internet regularly were doing research for the Defense Department (and Al Gore). Today, most of us have smart phones and use the Internet regularly in some way. Other technologies that we take for granted today, like automobiles and airplanes, are less than 100 years old.

Not surprisingly, technology has also changed the experience of war and what it means to be a soldier in a combat zone. One hundred years ago, if you were going to kill someone in combat you had to be able to see them: arrows, cannonballs, and muskets might send their projectiles 100 yards at best and we aimed with our eyeballs. Today, a solider can kill someone on the other side of the world through the use of an ICBM or a drone.

These changes have both benefits and costs, of course. Here are three ways technology has helped increase the number of folks who experience PTSD.

1. Technology saves lives. From the chemical and materials engineering the creates the Kevlar in bullet-proof vests to the medical advances that help save lives in the battlefield and back at the aid station, some injuries that almost certainly would have been fatal in World War II have a much lower likelihood of ending a life today.

This means more soldiers survive their combat wounds. But healing from those wounds — physically and emotionally — often extends beyond a soldier’s active duty time. Sadly, American politicians don’t really stand by our veterans. George W. Bush cut their benefits early in his presidency, then restored them before invading Iraq. We’ve had recent scandals regarding neglect at Walter Reed Army Medical Center and the general backlog of cases and claims (which got better during the shutdown).

2. Technology means faster transportation. Americans who came home from WWII and Korea walked or rode across country then completed their international travel by boat. After WWII, most also spent a few weeks re-acclimating to the U.S. in camps in the desert. By contrast, veterans from Vietnam and every subsequent war have mostly flown back to the U.S. and were often discharged within a week or two.

This means a journey home that took 2-3 months at the middle of the 20th century now takes 2-3 weeks. If you know someone who served in WWII or Korea and you can get them to talk about it, they’ll tell you the conversations shifted between the war, home, and the future. The balance of those topics matched their location. In the early stage of their journey, when they were still near the war zone, it was mostly about the horrors of war; later in the journey and closer to American soil, conversation was mostly about home and future.

If you can get them to open up, those men will also tell you they cried about the carnage they’d seen and the friends they lost, screamed from nightmares, and talked each other through it. After 2 or 3 months, including that re-acclimation time in the desert, most found some way to put their experience away, locked off in a part of their mind to never be examined too closely.

That makes perfect sense. The military is very clear that it takes a few months to create a soldier; you can’t just pick someone off the street one day, put them in a combat zone the next day, and expect them to do anything other than be a target. The separation between wartime and peacetime has been at the center of a broad swath of movies, including Full Metal Jacket, GI Jane, Band of Brothers, and Ender’s Game, as well as comedies likePrivate Benjamin and Stripes. If it takes months to toughen up both body and spirit before sending people to war, why would we expect veterans to re-adjust in a matter of days and without the help of other vets who’ve been there too?

3. Technology means routine contact with the folks at home. In the days before the Internet and before the ubiquitous presence of cell phones, going to war meant going away and having intermittent contact with home through letters, if at all. Today, one of the first things the U.S. military creates in a secured zone is a telecommunications center where off-duty GIs can access the Internet; these centers often facilitate cell phone service as well.

For American soldiers today, being at war — even in a combat zone — no longer automatically means that you’re cut off from the folks back home. It helps service members maintain their connections with family members which, in turn, appears to help lower the divorce rate among active duty service members. The idea that a soldier on duty can see his family members in real time has become a staple of advertisers (for example, here or here). There are lots of local news stories about deployed soldiers attending events at home through the Internet, like childbirth (here or here) or their own wedding (here).

But let’s think about that in a little more detail. If it takes the military months to change a civilian into a soldier, can that person really shift back and forth between those two roles in a matter of minutes? Many people say it takes them a little time to shift from work to home, and after a bad work day they may not really be ready to deal with the kids and home the moment they walk in the door. It often takes folks two or three days to really start to relax and settle in to a vacation, and that’s surely not as dramatic a shift as mentally entering and existing a war zone.

How surreal must it be to go from the carnage of combat to childbirth in the span of a few hours? Or stand watch on the perimeter, carefully checking to determine if anything that moves is a threat, and then watch an 8-year-old’s birthday party that includes a zillion kids running across the back of the video feed? Or even just shift from the mundane activities of life in a war zone camp that gets shelled throughout the day — if you can call that “mundane” — to talking about the everyday challenges of childrearing or making ends meet with your sweetie? Today’s soldiers can’t keep those two worlds separate the way past-generations of Americans did.

—
Don’t get me wrong. I’m not saying technology is bad or that we should prevent active duty service members in combat zones from talking to the folks back home. The technology has clear benefits: More soldiers survive their injuries, they return home faster, and they’re able to stay in contact with their families. Generally speaking, those are all good things.

But they’re good in general, not for everyone and not in all ways.

Given all these changes, there’s little wonder that more returning soldiers have PTSD today than in the past. In a culture where being a worker, earning your keep, and providing for your family are highly valued and taking time to sit and reflect is seen as an indulgence, we’ve deprived our returning veterans of something they very much need: time to wind down and return to the thing we call normal.