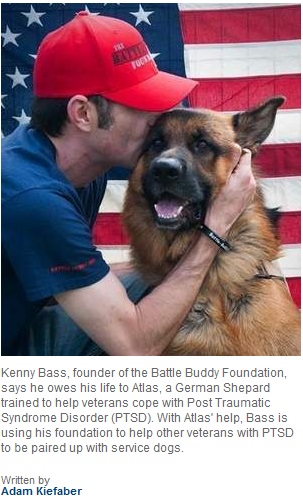 Kenny Bass, who resides in Monroe, suffered from Post Traumatic Syndrome Disorder (PTSD), and thought his family would be better off without him. He especially remembers one close call in 2010 that would have made him part of a staggering statistic from the U.S. Department of Veterans Affairs – an average of 22 veterans committed suicide every day in 2010.

But a German Shepherd named Atlas helped him recover from the condition, and now, Atlas has become a member of Bass’ family. Not only that, but Atlas is being honored as the grand marshal of Clermont County’s Veteran’s Day parade in New Richmond Monday. The parade starts at 7 p.m., starting at Light Street and running along Front Street in New Richmond.

Instead of honoring a military veteran, the group that puts on the parade wanted to honor someone who has served veterans back home. And Atlas, who also inspired Bass to start a foundation that helps pair returning military diagnosed with PTSD with service dogs, fit the bill.

“The general thought of having Atlas was because we usually recognize other aspects of support for veterans,” said Andrea Bryant, manager of administrative operations of the Clermont County Veterans’ Service Commission. “We would normally pick a veteran as grand marshal, a combat veteran who has achieved something of merit or have sacrificed a great deal for their fellow man. These dogs assist in all sorts of jobs, but they don’t get recognized.”

Atlas, who was specially trained to help veterans cope with PTSD, became a part of his life in September of 2012.

Now Atlas accompanies Bass everywhere, to the gas station, the grocery store, and even looks over him as he sleeps. Part of Atlas’ training is to know when Bass is about to have a nightmare. As Bass starts to have one, Atlas gently wakes him up and immediately changes the veteran’s life.

“I remember I used to have nightmares and scream to my wife in Arabic to put down her weapon,” Bass said. “It would affect your whole day. Sometimes, I would feel depressed for weeks.”

When Bass first heard about the option of having a trained service dog, he was hopeful that it would be the missing link to a mentally healthy life. It was, however, expensive.

As he tried to raise money for Atlas, which would cost $15,000, Bass was inspired by the help he received.

After receiving donations from complete strangers, Bass decided that he wanted to create a nonprofit organization geared to pair up veterans with PTSD with service dogs. In Feburary, he started The Battle Buddy Foundation, opening its West Chester offices in March.

“I was able to experience it first-hand. I once had a very pessimistic view on life,” Bass said. “A lot of veterans, when they come home, say that they were trained to turn on that kill switch, but we were never trained to turn it off. To have a Battle Buddy it helps with that needed training and reintegration back into society.”

At the end of the year, Bass hopes to pair up seven to 10 dogs with fellow veterans with PTSD at no cost to them. The foundation has already paired up three veterans with specially trained service dogs. Bass has done this, despite still owing $9,000 for Atlas.

“For me it has been very rewarding,” Bass said. “ I was able to take all that pain and struggle that I suffered for 10 years of my life and turn it around to help other veterans who are struggling. Just thinking about the fact that I was so far away from where I wanted to be, and to now know that the past 10 years had a purpose gives me goosebumps thinking about it.”

Upon hearing the story of Atlas and Bass, the Clermont County Veterans’ Service Commission decided that it wanted to go in a different direction for who they would appoint as grand marshal of their annual Veterans Day Parade. Atlas, with Bass by his side, will be the first-ever dog to serve as grand marshal for the parade.

“It is definitely an awesome feeling to know that he is going to have that recognition and more people will be aware of what we are doing,” Bass said. “He is the face of our foundation. He represents how he changed my life and how it gives hope that to other veterans that went through what I went through. It is definitely an exciting accomplishment.”